Before I get into this rant, it’s important for me – critical, even – to outline just how much I loved the Valkyria Chronicles series. I played the first three games to absolute death, and bought the thick-ass art books for all three (something I might show here on DS90 at some point). I don’t think that Sega ever managed to re-capture the magic of the original with the two PSP sequels, but they were still highly-enjoyable RPGs that must have done things right for me to invest so many hours into them.

With that background knowledge in mind, I suppose it was only natural that I didn’t want to believe the hate for Valkyria Revolution. Surely it couldn’t be that bad? Well, put it this way: there’s a reason why you can still easily pick up a brand-new, sealed copy of the (so-called) Limited Edition for less than £10.

END_OF_DOCUMENT_TOKEN_TO_BE_REPLACED 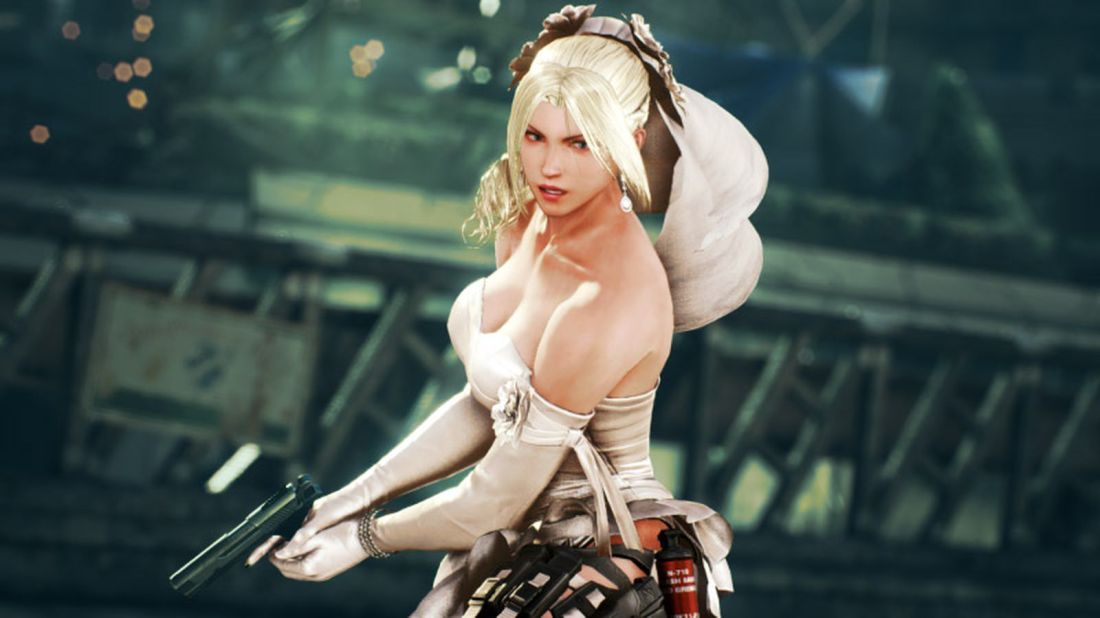 Contrary to the fact that I’m not posting on here every day, I do actually have a lot of things to say and various topics/reviews semi-written in my mind (just not physically typed-up where it matters…) so it’s a shame that life just loves to get in the way. Anyway, today I have found some time…time to plunge my arm into that insane melting pot of thoughts that is my mind and retrieve this topic centred on Femme Fatales in videogames. Or “Why I find dangerous, psychotic videogame girls sexy”. Yeah, that didn’t sound so great as the official title hence why I didn’t go with it.

So, what is it about femme fatales that I like so much? Well, I’m probably not alone in saying that I find strong women attractive and as much as I will unashamedly confess to having fun with pretty bimbo types in the likes of Dead or Alive Xtreme, I much prefer a strong lead female with a well-written personality/backstory. That’s the normal part. The not-so-normal part is that I find the psychotic, killer archtype pretty damn attractive as well when it comes to videogames (and books and movies too for that matter). Maybe it isn’t so strange though given how many guys seem to get some serious wood over DC’s Harley Quinn?

As well as attractive, I just consider the really bad girls to be straight-up cool and interesting. To better illustrate my point, I’ve compiled a shortlist of some of my favourite femme fatales who immediately spring to mind…

Let me begin by saying that Soul Calibur‘s most attractive lady is – without any doubt – Sophitia for her Greek Goddess-like charms and I will always ‘main’ her in any SC installment or at least her style via custom-created characters (the less said about her absence in SCV and poor replacement in the form of her daughter, the better). When Tira was introduced in Soul Calibur III however, I took an immediate liking to her. The blue hair was very out-of-place in the game but otherwise, I really dug her sexy green rags, feathers and pet raven. Most importantly though, her fighting style was new and unique and actually utilised her loopy personality with multiple stances accompanied by visible mood swings for the character. Tira is nuts and loves killing in an excitable child-like way that really does remind my of Harley Quinn. A really fun character that I am pleased to see appear in every installment since her debut. 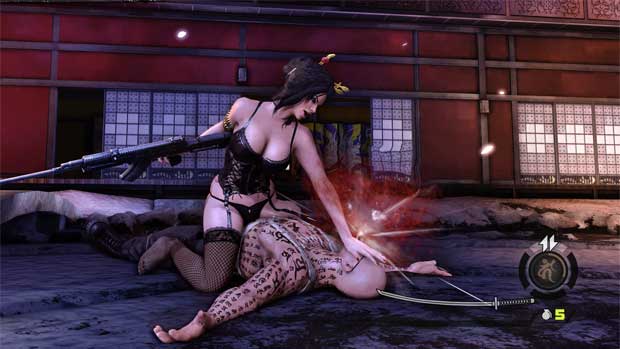 Devil’s Third for the Wii-U is no classic. It was in fact, a pretty poor game in my opinion that could (and should) have been something rather more special but the end product was a generic third-person action game full of the cheap crap that should have been left behind years ago in videogames such as invisible walls, inconsistent difficulty spikes and painful linearity. There were a few good elements though and some interesting characters (that were pretty much wasted by being in this game) such as Jane Doe, one of the toughest bosses in the game. A voluptuous Spanish beauty clad in a traditional Japanese kimono (when you first meet her in the game), she soon ditches the far eastern garb for…sexy lingerie and a massive rifle?!? Yep, she’s a bit of a mish-mash of things but all you need to know is that Jane has killer curves and equally dangerous attacks. Fight from a distance and she will try to gun you down but get up close and personal and try to dance toe-to-toe with her? Yeah, you will probably die…a lot. She has several kinky moves involving choking Ivan with her thighs or trying to break his neck while making suggestive groaning noises. If this kind of thing turns you on then repeatedly falling foul of her cheap one-shot kills may not be a terrible thing.

Surely a cute blonde in a Little Bo Peep get-up can’t be that dangerous, right? Wrong. The original No More Heroes was one of a slew of games for the Wii that dared to ignore the trend for family-friendly software on Nintendo’s crazy successful lil’ white box and us gamer’s loved Suda51 for it. The sequel is arguably the better and more streamlined game but the original is worth playing, even if it’s just for Bad Girl. That sweet, butter-wouldn’t-melt image is quickly discarded as Bad Girl reveals herself to be a foul-mouthed, beer-chugging psychopath with an unpredictable personality and a love for beating bound/gagged male gimps to death with her trusty baseball bat. It’s the kind of madness that can only come from somebody like Suda51 and Travis Touchdown’s encounter with this crazy lady is as memorable as it is fucked-up. Is it wrong to be just a little bit turned-on by Bad Girl’s insanity? 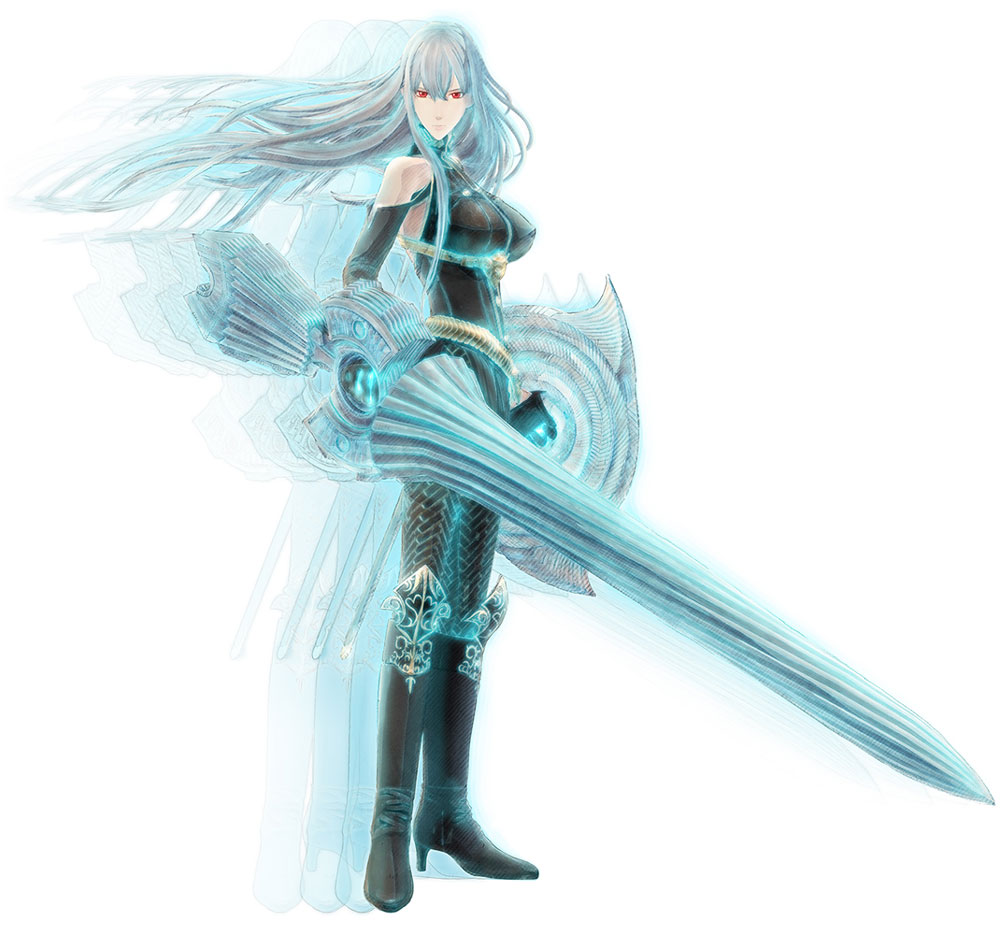 Now for character that has partially been ruined on the internet by exaggerated fan art: Selvaria Bles from Sega’s most excellent Valkyria Chronicles for PS3. This is a game that I cannot praise enough and while the sequels are an acquired taste for the truly devoted, the original is an outstanding tactical RPG that was a true breath of fresh air upon release, both in terms of gameplay and world design. The character of Selvaria was one of the best things about the game in my humble opinion. One of the opposing armies’ main generals, Selvaria wields the ancient power of the Valkyrur and is a feared force known to all. On the battlefield she is practically invincible and can destroy tanks with a single shot from her huge energy lance. There is a particular chapter in the game where Selvaria suddenly rocks up midway through the battle and proceeds to utterly demolish a player who foolishly believes that they can actually take her out like any other enemy boss. All you can do is frantically hide and attempt to complete the mission without Selvaria slaughtering all of your units. Valkyria Chronicles’ superb storytelling comes to fore when it initially portrays Selvaria to be a cold, merciless warrior but in reality she is simply being used by Maximillion, loyalty and love for her leader exploited so that he may wield her power in the Europan war. The DLC chapter titled Behind Her Blue Flame is particularly touching as Selvaria is revealed to be warm and caring towards your nameless engineer character. It’s a small bit of quality writing that shows that even the enemy is human and not necessarily evil.
Selvaria makes this list for being a great character in general, a fearsome/memorable enemy boss and a rare example of a female character designed to be attractive but also strong and succeeding on both counts.

I suppose when talking about femme fatales, I should be talking about “bad” girls and – as already mentioned – sexy nutcases but Kasumi’s half-sister from Dead or Alive isn’t really either of those things. She’s cocky and arrogant as a character but not an evil/bad person yet I suppose I will say that she leans more in that direction just to get Ayane on a list of some kind – she’s a bad girl at the least in some sense. Whenever I play Dead or Alive, I always ‘main’ Ayane because I love her speed, agility and the way that you maintain a distance from your opponent and punish them when they close in. Of course, it helps a ton that Team Ninja have always made her aesthetically pleasing on the eye and while most fanboys prefer Kasumi, I prefer her purple-haired nemesis for some reason. Surely it couldn’t be because Ayane is one of the most top-heavy of the DOA girls? No (what do you take me for?)…she’s just a cool girl in a cool fighting game. And she’s a ninja – everybody loves ninjas.

There aren’t may Irish characters in videogames and even less female Irish assassins so Tekken‘s Nina Williams pretty much has the niche to herself although there’s nothing particularly Irish about her, especially with respect to her voice-actress who is…er…not very Irish. This blonde bombshell was clearly Namco’s version of Virtua Fighter‘s Sarah Bryant back in 1994 when the original Tekken was released into arcades and (more importantly) the Playstation. A cool-headed assassin with top-tier combos and a selection of bone-snapping holds, Nina may look like a sexy model but she’s utterly bad-ass and calculating as per her assassin occupation. I’ve always mained Nina in Tekken (after Kazuya) and love her combos plus her variety of special ops-inspired outfits. I even have a soft spot for her solo PS2 game, Death By Degrees, despite the majority of people agreeing that it’s a poor game (possibly something I can properly re-visit and speak about in the future). Also, you have to admire Namco’s way of keeping Nina youthful between Tekken 2 and 3‘s large time lapse by explaining that she’d been placed in cryogenic storage. We certainly weren’t complaining.

There are undoubtedly more great examples of femme fatales that I have forgotten about and countless more from games that I haven’t even played so what do you think? Do you also have a little something for the wackier ladies in gaming? Do you agree or disagree with my choices? Let me know!